Profound changes are taking place in the cultural complexion of the world. Not only is the world in a state of dynamic and rapid change, but also a whole new era is also opening up in community, regional, national, and international affairs.

Situated squarely in the middle of these developments are people as individuals, as well as members of groups and citizens of countries. With all the changes going on in the world in economic systems, political practices, technological processes, religious beliefs, environmental policies, and demographic patterns, now is a propitious time to be enquiring into the roles and responsibilities of people as individuals in the world.

What is most apparent about this is how difficult it is for most people to cope with all the changes and developments going on in the world. This is largely because the two basic personality types that have driven world history and human behavior over the last two centuries—the economic personality and the specialist personality—are breaking down.

The concept of the economic personality is breaking down because it treats people as producers and consumers of goods, services, and material wealth at a time when these practices are having a devastating effect on the natural environment and, as well, not bringing people the satisfaction and happiness they expected to find in them. The idea of the specialist personality is breaking down because it encourages people to develop only a single skill and occupation when change is occurring so rapidly throughout the world that people’s areas of specialization are often out-of-date not long after they were acquired as a result of extraordinary developments in technology, communications, artificial intelligence, robotics, and a great deal else.

As a result of these developments, and others, people in all parts of the world are having the utmost difficulty coping with the problems of the present and prospects for the future. Clearly a new prototype of the human personality is needed to come to grips with these problems and prospects, as well as to drive human behavior and produce more fulfillment, meaning, and contentment in life and in the world.

Many people are turning to religion or returning to religion in the hope of finding solutions to these problems and developing this new type of personality. Virtually all the religions in the world—Christianity, Hinduism, Islam, Judaism, Buddhism, and so forth— contend that people will be able to confront the present and deal more effectively with the future by becoming deeply immersed in religion, making a strong commitment to the values, teachings, and beliefs of the faith, and adhering to these values, teachings, and beliefs as fully as possible.

Others have a different approach. They are searching for this new personality type by engaging in meditation or yoga, living in the present rather than the future or the past, and experiencing higher levels of consciousness through the teachings of scholars such as Eckhart Tolle, Deepak Chopra, Wayne Dyer, and others. Countless people are also turning to mystics, evangelists, and other spiritual leaders who possess powerful beliefs and convictions about how these capabilities and this personality can be realized in fact.

To date, little consideration has been given to culture and the role it can play in dealing with these problems and producing this new personality type. And yet, culture possesses a remarkable potential to achieve this, largely by creating the cultural personality to come to grips with the problems of the present and the challenges and limitless possibilities of the future.

If most people were asked today what they thought the term “the cultural personality” means, they would probably say it describes a person who is actively involved in the arts, humanities, and finer things of life or has a great deal of knowledge and understanding of these matters. This is because this is what it meant to be a “cultured person” in the past and what it continues to mean for many people.

While this is a very essential aspect of the cultural personality, it ignores many of the larger and more fundamental dimensions of this specific personality type that are relevant at present and bound to be much more relevant in the future. Indeed, when all the various ways culture manifests in the world are examined and considered in totality—from the narrower artistic, humanistic, and historical ones to the broader psychological, anthropological, ecological, and cosmological ones—they produce an understanding of the cultural personality as a person who is able to live a full and fulfilling cultural life and to live life as an “ordered whole” in the fullest and most complete, compelling, and all-encompassing sense. To do this is to place people in the strongest possible position to deal with the difficult and demanding problems of the present as well as the limitless challenges and opportunities of the future in all areas of life, from the most mundane and commonplace to the most ideal and sublime.

My latest book, The Cultural Personality (Rock’s Mills Press), attempts to provide a comprehensive framework for coming to grips with many of the most salient aspects and characteristics of the cultural personality. It does so by postulating an “ideal prototype of the cultural personality” against which people can measure the reality of their own experience, and to which they can look for guidance in times of adversity. It is a prototype based on the belief that culture in general and the cultural personality in particular provide the most effective avenues and means for dealing with the present and the future in all areas of life.

This article is an abridged extract from Paul’s new book The Cultural Personality which is available globally through Amazon and from Rock’s Mills Press (click here to download an order form).

Click here to read all of Paul’s posts at wherewordsfailblog.com

Reviews for The Cultural Personality:

“The new publication by Schafer is not just a book to read. It provokes thoughts and encourages us not to marginalize cultural personalities, but rather to move them into the center of a future sustainable development and world”.

“The Cultural Personality by Paul Schafer is a pioneering work and potent read”.

CLICK HERE TO READ MORE REVIEWS OF THE CULTURAL PERSONALITY 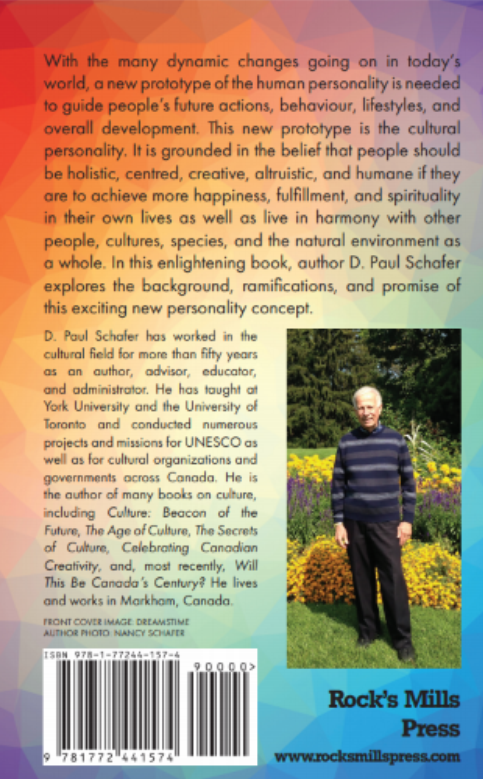